Juzoor for Health and Social Development (Juzoor) launched an urgent appeal to provide much needed support to the Gaza Strip in May 2021, following the attack on Gaza for 11 consecutive days, where death, destruction and continual suffering had become the reality for around 2 million people living in the 360-km2 Strip. As of May 17, two hundred people were killed (of whom 34 are women, 60 children and 106 Men). Since the start of the escalation, 132 buildings, comprising 621 housing and commercial units were destroyed. In addition, 316 housing units had been severely damaged, and rendered uninhabitable, according to the Shelter Cluster. An additional 206 housing units have suffered major damage, and 6,268 have suffered minor damage[1].

Juzoor’s proposed support to Gaza focused on the following themes:

The YWCA was quick to respond to the Gaza Emergency Appeal, where it has kindly contributed to themes (2) and (7) by supporting the holding of two summer camps for girls in Eastern and Western Gaza Strip. This was made possible through the generous support and cooperation with the YWCA Japan, where the latter proceeded to launch a major campaign for crowd funding and kindly secured the needed funds.

B.1)  Summer Camps Managerial and Technical Set Up:

Each camp was held for a period of 5 days for each 50 participants, starting at 08:30 AM and finishing at 12:30 in the afternoon. It was distributed as follows:

“I was always keeping to myself and did not like to mingle with people where I always faced problems when dealing with my class colleagues. I used to skip school often during the days where we had activities or trips, because of the difficult economic situation at home, and this caused a large rift.

This is what Ala’a, the 11 year old young girl with special needs, informed us of her challenges in her elementary school, as a result of the difficult economic situation that her family was passing through, and which had negatively affected her mingling with the outside world and her school classmates, and ended up not participating in events with her peers at school.

Ala’a adds, “This summer camp helped her discover herself and provided her with an opportunity to deal with her colleagues in the different group activities. She made new friends through the discussion sessions led by the Psychosocial responsible in the camp. She also learnt what it means to have health food and how it was not necessary that healthy food be expensive. It is possible to spend less money and enjoy health food, and benefit from the healthy habits. She also added that she was very happy to join such a camp and that this was her first time in Rafah, where the challenging economic family situation could not let her travel far due to the transportation cost, where the large number of family members required an extended means of transportation.

Ala’a thanked all that made this camp possible, and mentioned that it “is the first time that she talks about her suffering. She also took the decision to share her story to show the difference that happened in her personality from the support that she received at the camp”. She mentioned that she hoped that the camp be held another time, and was very happy to make new friends and to learn about a number of archaeological sites in Gaza and was happy to attend the closing ceremony where she participated with a number of her friend in the activities, and realized that friendship is the basis of all things in life and that life without friends has no meaning. The highest meaning for life is sharing.

The summer camp had a big impact on the behaviour of female students, where many of them were very shy and did not participate and react with the different activities. Through the ice breaking, group activities, discussions and introduction exercises, several female students started to react and it was very clear in the last two days of the camp, especially in the recreational trip and the Al Mashtal hotel, these students expressed their happiness to have participated in these activities.

During my participation in the camp for five days, I noticed the behaviour of a 13-year old female student, from the seventh grade, who did not want to participate in the activities and chose to distance herself from participating in the activities. She would bite her nails and had nervous legs. We had a private meeting with the student where the school health officer joined, and we found out that the student suffered from fear, especially after the last onslaught on Gaza. We gave her special attention through drawings, sports activities and interactive reactive letting out sessions, where the student responded positively and started accepting her peers and getting involved in the different activities, and this was noted to the school principal so that the educational counsellor continue those efforts with the concerned student after the camp.

“Lamar Ayesh, ninth grade student stated that the summer camp was a beacon of hope for me and other students, where we managed to break the routine and fear barriers, and we participate in several activities and functions, which rekindled hope in our spirits. The most beautiful part of the camp was the closing ceremony where we were happy with the activities and I am passionate that such camps take place again soon”.

“We used to hear a lot about psychological venting, and we were never exposed to it. Today, opportunity knocked on my door, where the school principal selected unique female students and my name was on the list. I was happy but also nervous, since I did not know what the activities at the camp would be and what my role was but it turned out to be the most amazing 5 days of my life in Gaza”

This is how Sara, the 15 year old, started talking how she needed such a camp that aims to help female student vent out the stress that resulted from the unstable situation in Gaza and how life turned upside down in one day.

Sara added that the “camp helped her get out of the depressed state she was suffering from, and which had affected her grades. Sara explained how the camp activities bettered her psychological state, where I was introduced to other students of different ages, and gave me the opportunity to learn about healthy eating and that the sound mind is in the sound body, where we had the opportunity to learn and practice by the trainers during a group healthy breakfast, and each student brought one type of vegetables. The most distinctive part of the camp was the outdoor activities, where we went to be introduced to the Gaza archaeological sites and learn many new things, and the best part was the recreational park. As for the last day, the closing ceremony included several activities, great shows, and, frankly, was a great day that I would see repeated”

In the end, Sara “thanked all who participated in making this camp a success especially the YWCA Japan, and expressed that it was the best day of her life, and mentioned that before she felt lost and had no hope. With the support of the psychosocial support that she received at the camp, she now looks at life with a different perspective, and Sara concluded that she had lost her passion for life, but now sees a better future and that there is something worth living for on this earth. As long as there is a tomorrow, there is a new chance every day.” 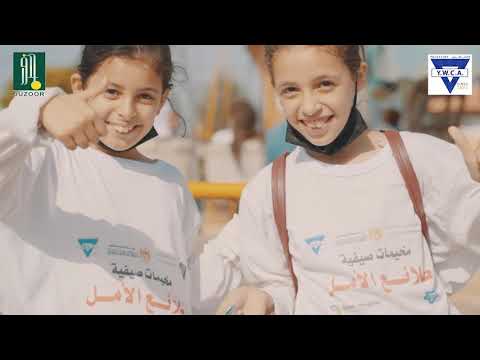